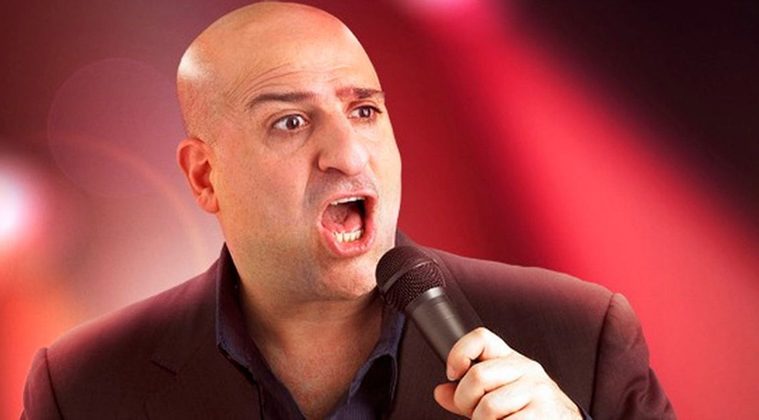 Are you ready for Omid Djalili’s November 15th Schmuck for the Night?

If you have been waiting for Omid Djalili to get back on tour, you are in luck! The award-winning comedian and actor is back on a nationwide tour.  His stand-up comedy performances have been lauded in many quarters.

The Telegraph called him one of the most entertaining, simulating and joyfully smart comedians in the country. The Sunday Times said he knows how to deliver a perfect blend of mainstream gags with a subversive twinkle.  The Metro said he is confident and engaging, a real National Treasure.

Omid Djalili is intelligent and highly entertaining and therefore, all his stand-up performances are hugely energetic and are lessons in comedy mastery.  Omid Djalili has been on TV for years, featuring heavily in Hollywood and on UK TV. Lucky Man on Sky1 and Dickensian on BBC1 are some of his latest appearances on UK TV.

His November event is bound to be every inch and riveting as his past shows. Mark down November 15th in your diary!

Omid typically takes to the stage in the midst of a massive applause and he milks every bit of it by usually asking fans for more applause. His stand-up shows normally take you through the mind of a comic marvel. He usually adapts to fit into today’s current affairs ranging from topical discussions in the political arena to comical stuff on social media. His witty sense of humour immediately starts shining through a few minutes in.  You are sure to be treated to a night of loud and consistent comedy with fire-friendly jokes bound to send the audience into fits of laughter every now and again!

Omid is a highly decorated British-Iranian comedian. Some of his biggest accomplishments include performing at the Edinburgh Fringe Festival, and appearing in films such as Sex and the City 2,The Pirates of the Caribbean: At World’s End and The Love Guru.  He was a student of English and theatre at the University of Ulster in Northern Ireland. His first main comedy performance was at the Edinburgh Fringe Festival show entitled Short Fat Kebab Show Owner’s Son.

As someone with an Iranian background, he has been able to play Islamic characters in films such as Gladiator, The Mummy, and The World’s Not Enough. He also starred in 22 episodes of Whoopi Goldberg’s NBC sitcom.  He was raised in England by Iranian immigrant parents. He is now married with three children.

Age restrictions: The show is restricted to only people aged 16 and a